So LSU AD Forfeits the High Ground? Not so fast, my friends.... 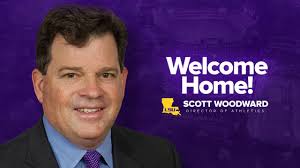 So how do I start this?

I just read an article written by Les East where he uses a headline and inaccurate information to insinuate the new LSU Athletic Director, Scott Woodward, has elected to stop sharing proceeds generated by athletics with Academics.

THIS IS A  CRAP ARTICLE!  Ol' Les should have his pen jammed in his eye socket for spreading such crappy information and suggestive headlines.

Woodward didn’t stop contributions (or “end donations”) to the University. He pulled out of an agreement where athletics committed to provide $36 million over five years by annually transferring $7.2 million, plus a portion of its net surplus, to support LSU's academic, research, public service and other missions. This commitment guaranteed funds to academics with no oversight or input regarding where these athletic contributions were allocated and with no regard to the actual earnings LSU athletics produced.

Woodward killed this... and should have! He has also pledged to continue providing support but based on profits realized and with a say in where the money is spent. Common Sense! And requested by the boosters supporting LSU athletics to begin with.

This article grabs attention using inaccurate and misleading claims and doesn’t include facts in the article. Sad!

The truth of the matter.... From the Baton Rouge Advocate:

LSU President F. King Alexander said there isn't as much a donation disparity between athletics and academics as perceived.

Alexander pointed out the separation between athletic fundraising and academic fundraising, citing an LSU Foundation report from June 1, 2018 to June 30, 2019, which said 70 percent of total donations went to academics, 28 percent to athletics and 2 percent went to alumni operations.

Alexander said there has been a concerted effort on the academic end to raise money for its needs, including the $1.5 billion campaign.

"Athletics isn't declining," Alexander said. "It's staying about where it has been in the past. The only difference is the aggressiveness that we're going out there with the campaign to raise money on the academic side to make up for the years that we perhaps should have been doing.

Since the guarantee of athletic contributions, there has been a decline in a concerted effort to address fundraising for academics. With Woodward pulling away the guarantee, there should now be a focus to increase academic contributions and how funds are allocated.

It’s a smart move. Would be nice if the author of this story did his homework before simply throwing out headlines to grab attention and stroke the flames of controversy with misleading content and a story lacking facts.

Seems to be par for the course in media these days. Les East... you're FAKE NEWS!